Making The Dough
I make my own dough, usually using 5 parts white high gluten flower, 1 part whole wheat flower.  Using wheat flower makes the dough taste more robust, and it's a little healthier for you.  On the down side, it makes the dough harder to work with.  I make big batches, six cups of flour per batch.  That will make two HUGE pizzas, or four mid sized (I make four per batch).

I mix the dough in a mixer using a yeast hook for a good 10 minutes.  I cut the dough in half, spray it with oil or Pam, and put it in a bread bag to keep it from drying out in the air.  I let it rise for a little over an hour, until it's about double in size.  At that point, I gently deflate the dough (letting the yeasty air out of the bag) and then move it into the refrigerator, where it sits undisturbed for at least 4-6 hours, preferably 12-18 hours.  The cold environment slows the rising process, making pizza dough actually taste like pizza dough instead of bread.  If, after about 24 hours or so, I haven't used the dough, it goes into the freezer.

Rolling the Dough
When the time comes to make the pizza, I spread corn meal on the (clean) counter top, and roll it out.  I try to stretch it by hand as much as possible, and use a rolling pin to finish the job, as necessary.  I'd prefer not to use a rolling pin, but that wheat flower sometimes makes it difficult.  I roll the dough out in a circle, about the same size as the pan.  I don't make a big crust anymore because nobody seems to eat it.  Now, my crusts are quite small and they do get eaten.

Size
If you're cooking for just your family, maybe making one big monster pie is all you need.  But I think smaller is better.  Why?  Because with the big monster pie, they eat one piece and they're full.  With smaller, thinner pizza, they can eat a lot more, and enjoy the variety you throw at them.  This rings especially true when cooking for a large group of people.  10-12 inches works best.

The Pan
You can use a pan, a stone, or whatever.  I use a pizza screen, because it enables me to cook the pizza really hot.  You can use a pizza pan and cook for 20 minutes at 400 degrees, or you can use a screen and cook for 10 minutes or less at 500 degrees.  Bread tastes better when cooked hotter, and from what I've seen, that also applies to pizza crusts.  So give a screen a try.  I use 12 inch pizza screens.  I think I bought them on Amazon.com for about four bucks each.

The Sauce
I sometimes just do an olive oil base, but usually do a two phase sauce instead.  The first layer is just olive oil and some sort of sugar (agave nectar works well).  The second layer is a fairly run-of-the-mill tomato sauce.  The sugar in the olive oil base takes some of the distracting bite out of the tomato sauce.

The Cheese
Next comes the cheese.  Lots of shredded mozzarella cheese.  Don't go crazy, just a generous layer that coats the pizza.  You can sneak a layer of fresh basil leaves under there so they don't get burned to a crisp in the oven, too.

The Toppings
Next comes the toppings.  Anything that needs to cook more should be on top.  Anything delicate (e.g. spinach or basil leaves) should go on first, so other toppings can protect them from getting burned.  Top everything off with a small sprinkling of a more pungent cheese (e.g. parmesan) and it's ready for the oven.

On the outdoor grill, I heat it up to at least 400 degrees and put two pizzas (on screens) on the top shelf.  They come out great.

Serving
Some people think you should let the pizza sit for a few minutes, to allow everything to set.  I guess that's probably a good idea.  For me, the hotter, the better, so I don't usually wait.  I cut it up, transfer from the screen to a serving platter, and serve it to the family/guests/whomever.  By the time it gets to them, it's been sitting long enough to eat.  Meanwhile, I reserve a piece for me and eat it while it's still scalding hot.

Enjoy
That's how I do it.  Hope you learned something.

We've got a huge fig tree in our front yard. The figs are finally getting ripe. They're scary looking, but quite tasty: 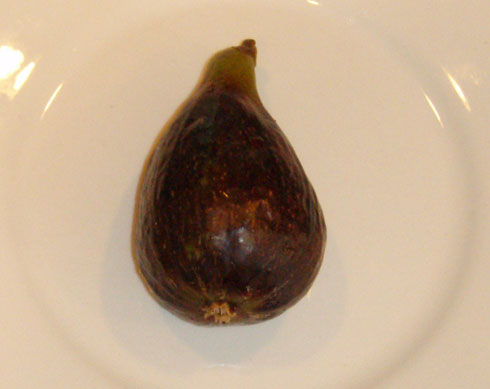 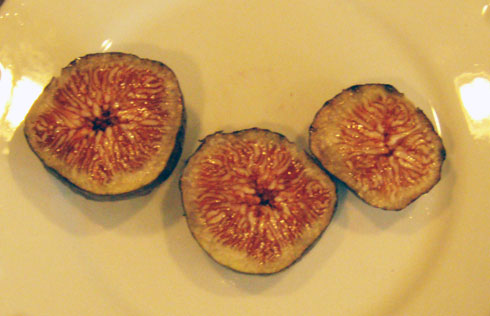 Donna will not eat them because "they remind her of a small intestine."