No car, not so bad 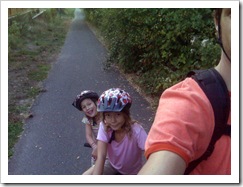 I lost the last remaining key to my car almost two weeks ago, so I've been doing without for a while.

The kids have soccer practice three times a week, so we've been riding there.  It's great!

The climbs are kind of tough on them, especially my 6 year old.  When she comes along, I've been using a trail-a-bike that's got two seats--a tandem trail-a-bike!

If you've ever towed one of these things, you might have experienced the radical reduction in your ability to go in a straight line.  As you might expect, towing two kids along amplifies this.  My front wheel has actually skidded sideways while I was trying to keep the bike under control.  So when dad yells "BALANCE," he really means it!

There have been a few moments when I was a little concerned, but they were short lived.  Reminds me of the time I was going down a very big hill, towing the kids in a trailer, and my frame broke.  "Uh oh," I thought, as my suddenly floppy bike swerved all over the place.

When given a choice, the kids are now choosing to ride instead of drive.  I think that's great!

Comments (3)
Comments (Comment Moderation is enabled. Your comment will not appear until approved.)
[Add Comment] [Subscribe to Comments]
yeah - I equate pulling the trail-a-bike to riding along with someone constantly yanking back and forth on the seatpost... and i've only had a single behind me... man a double. crazy... now I gotta go find one
# Posted By gewilli | 9/22/08 6:40 AM
Now your ready to tour the country side with just you and the kids! Just look at Joe Kurmaskie. If you haven't read "Momentum is your friend, well it's time now that you read it before you go on your next journey! lol!
# Posted By karleta | 9/22/08 11:40 AM
Flipped a Burley with 2 kids in it? Check
Forgot to secure the bolt in the Trail a bike and have it come loose and pass you as your daughter slides by? Check...

Thankfully, both my kids still trust me and still like doing the trail a bike thing. I'm not sure if I could handle a double though.