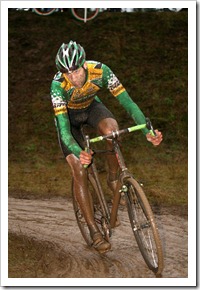 There I stood, watching my race leave without me.  I got off my bike to find the source of the loud cracking noise that brought me to a grinding hault, not five seconds after the start.  My brake's straddle cable came off, the caliper caught the rim and got sucked into the spokes.  Seriously?  How does that even happen?  I fixed the problem, and looked up to the challenge ahead of me.  I joked out loud, saying I had them just where I wanted them.  Actually, that was true.

I had nothing to loose.  I hopped on my bike, stomped on the pedals and started a crazed hunt for victims.  I'd passed my first rider within a minute, and they just kept coming.

It didn't take long for me to realize something wasn't quite right with my bike.  I'd pulled a spoke clean through the rim, and it was getting pretty badly out of true.  My gears were jumping all over the place, too.  I had a spare in the pit, but it was a single speed, and the passes kept coming, so I just stayed with the wounded 'A' bike.  I decided I'd do a bike swap when it became unrideable, but It never did.

Coming into the bell lap, I heard someone tell me I was just a few places outside the top ten.  Really?!?  Top 10 may not sound like much, but I really wanted that.  I kept digging to see what I could get.

Final lap, last half mile.  I bridged up to a group of five with Mike Szwaya.  We were riding along a gravel road on the top ridge of the park.  Soon, we'd make a sweeping downhill left-hander into some slick, fast ground.  The time to attack was now.

Just moments, and I mean maybe one second before I attacked, Mike took a dig.  His teammate Martin Baker saw it happening and grabbed his wheel, and I found a bigger gear that wouldn't skip and jumped on behind him.  Down the sweeping turn, through some slick bumpy ground, we slowed up a bit.  I jumped at the chance and attacked, heading to the final nasty run-up before the finish line.  I hit the run-up in front, but Martin outran me and got to the line first.  I rolled in for 10th place, which I think is my best placing ever in the Master A category.  Yeah, I'd like to be fighting for the win, but one step at a time!